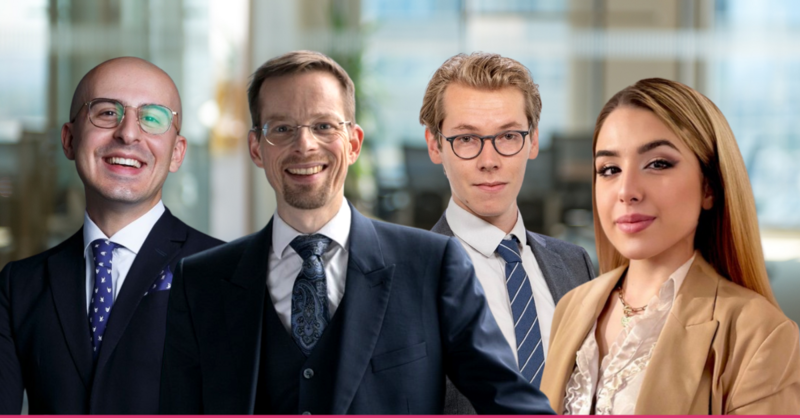 In February 2022, the ABBL and the ACA signed a partnership agreement strengthening the collaboration between the two associations. This new partnership is materialized in particular by the fact that the joint public affairs representation office of the ABBL and ALFI will henceforth also defend the interests of Luxembourg insurers. In this context, we invite you to meet our people in Brussels.

We must be present and close. Whenever we are asked for our opinion, we must demonstrate that we bring added value.

Antoine, when and why was the idea of a representative office in Brussels born?

The office was jointly founded by the ABBL and ALFI in 2006. There was no triggering event as such, but rather it was the result of a long maturation that started at the beginning of the 2000s, when I was a parliamentary attaché to an MEP. I had regular exchanges with the ABBL and ALFI and little by little the need to open such an office became obvious for the associations, particularly since the regulatory framework for the financial sector was increasingly being forged in Brussels. We should remember that the Commission's first action plan in this area dates to 1999.

I started on my own in 2006. We were among the precursors, because at the level of foreign banking associations, only the Germans, French and Italians were present in Brussels at that time. In 2011, with the wave of regulations that followed the financial crisis of 2008-2009 - no more and no less than 48 directives and regulations - the need to hire a second person became a necessity. In 2012, we started to bring in interns. And now that the ACA has joined us, we have recruited a third staff member.

What are the main challenges you have encountered since 2006?

I would say that they are twofold: the loss of credibility of financial professionals in the eyes of political authorities and the fact that Luxembourg is for structural reasons regularly isolated in defending certain interests.

Let's start with the loss of credibility. Until 2007, the voice of financial professionals was worth its weight in gold. We were the experts, and our opinions were generally welcomed by legislators when it came to drafting new directives or regulations.

The financial crisis of 2008 and 2009 changed all that. The dysfunctions of the financial sector were certainly serious, but overnight we became people to be distrusted. Our words were greeted with a negative bias. As Warren Buffet said: "It takes 20 years to build a reputation and five minutes to destroy it". We are slowly rebuilding trust, but we are certainly not back to the pre-crisis situation yet.

It is also worth adding to this context the fact that for some of our interlocutors, Luxembourg, whatever it does, will always be seen as a tax haven. This preconceived idea does not help us to recreate links either.

Is it fair to say that since the Brexit, the Luxembourg financial centre is more isolated in terms of advocacy?

Before the Brexit, there was one international financial centre based in a large country and two in small countries. Now there are only the latter two. So yes, with the UK we have lost an ally on many issues. And this is the second challenge I was referring to.

But, just like our interlocutors at the Ministry of Finance, we have a combative culture and know how to make ourselves heard. We have ever since the 2016 referendum been adjusting and improving our advocacy capacities a.o. by working more closely with like-minded representatives of other financial centers and sectors and extending our network and efficiency in what we do.

A recent example is the treatment of depositary banks in the AIFMD, where we are pretty much on our own, but where in the end by hard work we seem to have won the case with the texts that have been on the table in the last months and a half.

How can we re-establish our credibility and a climate of trust with our interlocutors in Brussels?

We must be present and close. Whenever we are asked for our opinion, we must demonstrate that we bring added value.

We must be able to convince, at the highest level, by seizing the opportunities we are given to meet the Commissioner in charge of the financial sector. This happens at least once a year. Once the commissioner is convinced that we have a subject, he or she will ask his or her advisers for confirmation. Also, and as important if not more so is to prepare the ground at the N-1 level. This is where basic legislation is created and where we meet the people that will be shaping it in practice.

What is a normal day like for a public affairs advisor?

There is no such thing as a normal day. But this is what our day-to-day life might be like.

Most of the day is spent working on technical files with the ABBL, ALFI and ACA experts, as providing content and relevant data to our interlocutors is the lifeblood of the job.

Alternatively, a day can be punctuated by an informal breakfast or lunch with an MEP or parliamentary attaché. Our first interlocutors here are the Luxembourg MEPs and their teams. We are fortunate that some of them sit and are active in the committees that are important for the financial centre. Over the years we have also built up a significant network of MEPs from other Member States and their assistants whom we also regularly meet to exchange on issues of importance to the Luxembourg financial center. However, it is worth pointing out an important development here. If previously, most of the subjects that concerned us were dealt with by the Economic and Monetary Affairs Committee, today initiatives from other committees such as the Environment Committee, the Civil Liberties Committee or the Legal Affairs Committee also impact us.

Of course, there are also more formal working meetings with Commission staff or financial attachés from the Member States. And we meet regularly on a weekly, bi-monthly, or monthly basis with our colleagues from other federations or with the European Banking Federation.

We also attend numerous thematic conferences or roundtables and represent our three associations at various receptions, which are opportunities to expand our network and get our messages across again.

What will be your main topics over the months to come?

We have a very full agenda. I will limit myself to name dropping: banking package including the treatment of third country branches in the CRD, CRR, BRRD, instant payments, PSD2 review, Open Finance, CSDDD, AIFMD, money market fund regulation; Solvency II, IRRD, AML package, taxation, retail investment strategy and package, product liability directive etc. Three of us will not be too many to deal with all these issues.

And for the friendly wink!

If one day you happen to be in Brussels, here are the gastronomic recommandations of our colleagues:

Volta Supper Club, rue E. Solvay 10. 1050 Bruxelles
"After a delicious pizza for dinner, head downstairs and look for the speakeasy to continue your evening!" Leonardo

Antoine Kremer set up and heads the representative office of the ABBL, ACA and ALFI in Brussels. In this capacity, he is responsible for representing the three associations before the European institutions.

Antoine has professional experience with several European institutions including the Commission, the Parliament and the Council and a pure advocacy experience of 16 years. He holds a degree in International Affairs from the University of Louvain-la-Neuve (Belgium) and a Master in European Legal Affairs from the European Institute of Public Affairs. Antoine is fluent in Luxembourgish, English, French, German, Italian and Dutch.

Leonardo has a background in financial services policy and legislation, and he joins from FTI Consulting. There, for the past three years he has advised several financial services firms on how to effectively engage in Brussels and develop advocacy campaigns. As part of his experience at FTI Consulting, Leonardo has been seconded to a global asset management company, working closely with the firm's government affairs team in advancing their legislative and regulatory priorities in the EU.

Leonardo holds a Master of Science in Economics and Management of Government and International Organizations from Bocconi University, and he is fluent in English and Italian.

Before joining the ABBL in October 2022, Xavier worked at the Public Affairs consulting firm FleishmanHillard as an Account Manager in the Financial Services practice where he assisted a broad range of market leading clients with their public affairs strategy.

Xavier holds a master’s degree in Political Economy from the London School of Economics and a bachelor’s degree from the Grenoble Graduate School of Business.

Giorgia is the one-year intern at the Brussels Office and in charge of monitoring meetings and developments in the EU institutions while also assisting the rest of the team in their advocacy activities. Before joining ABBL, ALFI and ACA she was a practicing attorney at Lucchi Law Office and specialized in criminal and tax law (2020-2021).